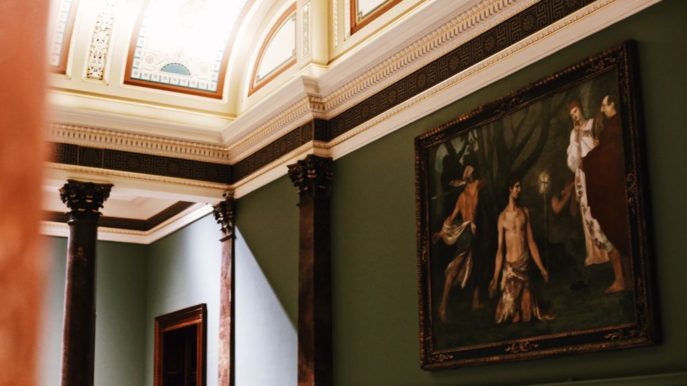 Natalia Goncharova was a Russian painter and London’s Tate Modern gallery displays some of her best works of art at an exhibition. Note that the exhibition opens with a Gauguin-influenced portrait named “Peasant Woman from Tula Province”. Through the artworks, the show effortlessly communicates some complex yet still-resonant ideas with the spectators such as the identity, assimilation, battles between national and global, and the boundaries of conceptual strategies.

A Retrospective Devoted to an Astute and a Receptive Synthesiser

Goncharova was the first ever Russian painter to blend modern flatness, simplicity of form and bold outline with local references. One of her popular religiously-themed and four-part work, “The Evangelists” blends together a modernist manner and the hieratic icons’ style with the rhythmic and straightforward evocative of Russian textiles. On the other hand, her “still life” paintings hint at folk media.

A patchy narrative series of the artist from the 1908 to 1912 period depicts peasant life, which was a subject of obsession for Russian artists and writers since the times of Tolstoy and IlyaRepin. At its artistic best, you can see a series of works that cross Pablo Picasso’s Geometrisation, lubok” woodcuts, and the archaic Scythian sculpture. Note that these details are well-portrayed in the chiseled mask-like faces of Goncharova’s “Peasants Picking Apples”.

A prewar Viennese critic noted, “A very short while ago it was a saying that if one scratched a Russian, one discovered a barbarian. Now . . . in this barbarian we find a great artistic advantage . . . The barbarian embraces with the most elegant of modernists and each complete the other.”

As some people think, Natalia Goncharova was not a barbarian, but an astute manipulator of identities. She was born in Tula to a rich family, linked to Pushkin, and was a cosmopolitan intellectual, whose role in the history of art was small yet notable.

Her works after the Russian Revolution of 1917 is negligible, and the Tate Modern exhibits only four examples. Overall, she can be defined as an artist, who is not exposed to foreign travel. Hailing from working-class backgrounds, Goncharova took the Russian avant-garde to its conclusion, i.e., to abstraction and back during the 1930s. By this period, nationalism in fine art was already a terrifying force. In Paris city, Goncharova continued her artistic journey as a theater designer through the 1920s and ’30s.

Concluding this exhibition and looking back to the opening portrait in a poignant way, you can see the flamboyant drawing on provincial clothing that demonstrates Goncharova’s flair for ornamentation. You can find even more details about the life and work of Goncharova when on your private tour of Tate Modern. It is to be noted that the exhibition runs through September 08, 2019.